Nairobi, 25 February 2015 – A transition to modern district energy systems could contribute to 60 per cent of required energy sector emissions reductions by 2050, and reduce primary energy consumption by up to 50 per cent, according to a new report launched today by the United Nations Environment Programme (UNEP) in collaboration with the Copenhagen Centre on Energy Efficiency (C2E2), ICLEI – Local Governments for Sustainability, and UN-Habitat.

With cities accounting for 70 per cent of global energy use and for 40-50 per cent of greenhouse gas emissions worldwide, District Energy in Cities: Unlocking the Potential of Energy Efficiency and Renewable Energy, reveals how local authorities and national governments can develop energy-efficient, climate-resilient and affordable district energy systems as one of the most cost-effective and efficient solutions for reducing greenhouse gas emissions and primary energy demand, and for helping to keep global temperature rise to two degrees Celsius above pre-industrial levels.

The Copenhagen Centre for Energy Efficiency (C2E2)  helped to engage and survey over 45 cities globally that use district energy systems to meet the heating and cooling needs of buildings. The publication will be used by cities wanting to adopt or upgrade district energy systems. In addition to helping with the survey, C2E2 also highlighted the socio-economic benefits of District Energy Systems such as job creation and is now engaged in promoting District Energy Systems at various forums.

“Our response and our ability to keep the world within a 2°C scenario, has led us to focus on district energy in cities. These are practical, reliable, bring benefits to consumers and they generate benefits in terms of our response to climate change,” said Achim Steiner, United Nations Under-Secretary-General and Executive Director of UNEP.

“In launching this report, we want to draw attention of the world’s decision makers, mayors, leaders at the community level, to the importance of district energy systems and hopefully through the lessons learnt in many parts of the world, ensure that this is yet one more element of our response that will allow us to practice and draw upon solutions already in place, proven and part of the transition to a green economy.”

Currently, heating and cooling, of space and water, account for half of the energy consumption in some cities, with systemic inefficiencies incurring massive economic and social costs, and acting as a major barrier to universal access to modern energy.

Cooling demand in particular is growing worldwide, spending on energy services is increasing. According to the International Energy Agency, energy consumption for space cooling increased 60 per cent globally from 2000 to 2010, and is set to expand by 625 per cent by 2050 in selected regions of Asia and Latin America.

District energy systems – which pipe steam, hot water or cold water around a city from a central location for use in buildings – are being used in a variety of cities worldwide because of their higher energy efficiency which can significantly reduce the greenhouse gas emissions of cooling and heating. This can result in improved air quality, and, where district systems use renewable power sources, reduce reliance on fossil fuels and energy imports, increasing the resilience of cities to fuel price shocks.

The city of St Paul, Minnesota, USA, for example, uses district energy fuelled by municipal wood waste to displace 275,000 tons of coal annually and to keep US$12 million in energy expenses circulating in the local economy. And in Toronto, Canada, the extraction of lake water for district cooling reduces electricity use for cooling by 90 per cent, earning the city US$89 million from selling a 43 per cent share in its district energy systems, which it could use to fund other sustainable infrastructure development.
Paris, France, is providing cheaper, more renewable heat through district heating and, by owning a third of its district heating company, also benefits from an annual dividend of $US 2.6 million and an annual concession fee of $US 9.1 million.

Through an analysis of the 45 ‘champion cities’, which have collectively installed more than 36 GW of district heating capacity (equivalent to 3.6 million households), 6 GW of district cooling capacity (equivalent to 600,000 households) and 12,000 km of district energy networks, the report finds that while contributions of district energy are significant and growing, the full potential of these systems remains largely untapped, with significant opportunities existing for growth, refurbishment and new
development.

“Cities are crucial partners in making Sustainable Energy for All a reality. With their help we can change the environment, change the way we produce and use energy and at the same time significantly mitigate climate change, accelerate economic development, reduce environmental pollution and alleviate extreme poverty and thereby making cities a lot more resilient,” said Kandeh Yumkella, UN Under-Secretary-General, Special Representative of the Secretary-General and CEO of the Sustainable Energy for All initiative.

Gujarat International Finance Tec-City, known as GIFT City, India, is developing the country’s first district cooling system, which could reduce electricity demand for cooling by 65-80 per cent. Yerevan, Armenia, is retrofitting and modernizing its district heating systems, which historically had losses as high as 50 per cent. After the first phase of refurbishment, 10,000 residents were reconnected, reducing energy consumption by 50.2 GWh annually and providing heat at cheaper rates than with residential gas boilers. While a Booz & Company 2012 study of the Gulf countries found that district cooling could provide 30 per cent of forecasted cooling needs by 2030, avoiding 20 GW of new power capacity and 200,000 barrels of oil equivalent per day in fuel.

Local governments are uniquely positioned to advance district energy systems in their various capacities as planners and regulators, as facilitators of finance, as role models and advocates, and as large consumers of energy and providers of infrastructure and services (e.g., energy, transport, housing, waste collection, and wastewater treatment). For example, in 2012 alone, the Greater London Authority’s integrated energy and land-use planning policy resulted in US$213 million of investment in heat network infrastructure.

The policy options available to cities often are influenced by national frameworks and the extent of devolved authority. This publication outlines the policy best practices that local governments can use within these four broad capacities, accounting for diverse national frameworks.

To facilitate the transition to modern district energy systems, UNEP has launched a new initiative on District Energy in Cities, as the implementing mechanism for the Sustainable Energy for All (SE4ALL) District Energy accelerator. As part of this initiative UNEP has developed a policy and investment road map comprising 10 key steps to accelerate the development, modernization and scale-up of district energy in cities.

A decision tree, developed as an outcome of this publication and of the exchanges with the 45 champion cities, will guide cities through these various stages and highlight tools and best practices that could be available to local governments in their roles as planner and regulator, facilitator, provider and consumer, coordinator and advocate. Twinning between cities – matching champion ones with learning ones – will be a key component of the new district energy initiative led by UNEP. 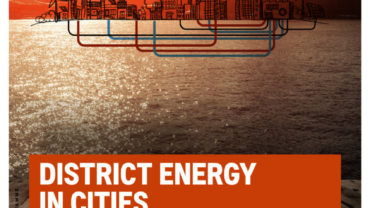 District energy in cities: unlocking the potential of energy efficiency and renewable energy